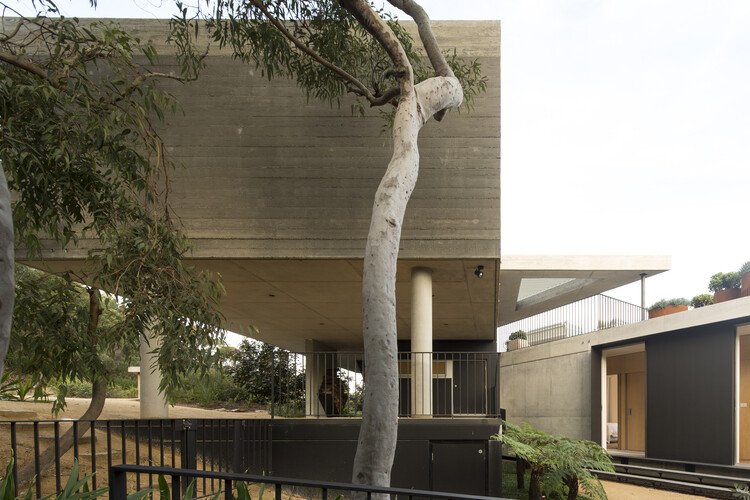 Text description provided by the architects. The House Acute is a weekender built for a family of 6 on a site abutting the edge of the NSW coastline. The site is exposed to the ocean elements and also sits adjacent to a severe bush-fire-prone coastal bluff. The design and the palette in particular would need to be robust in nature. The site is also a small wedge-shaped, almost unwanted parcel of land, which would also ultimately influence the design. The conceptual approach was therefore to create a wedge-shaped home consisting of two long concrete pavilions lapping over each other on the acute corner.

The Ground Floor level is the primary entry-level and includes a bedroom wing with associated wet areas. An open planned carport was created beneath the first-floor massing above enabling direct access into the home. A secondary living zone was created at the acute corner.

The first-floor level is the primary living zone including a large covered terrace on the roof of the massing to the south below, and a cantilevered balcony on the northern side which engages with the street. A self-contained master bedroom wing has been positioned behind the kitchen enabling the owners to use this level only when they stay without their children.

A modest roof-top terrace has been included above the first floor with internal stair access. The two overlapping pavilions sit comfortably with the fall in the land such that 4 distinctly different and separate storeys have been created. There is still space to find solitude if and when required.

The tallest point of the massing occurs on the lowest part of the site being the southern boundary. The acute corner sits proudly at the bend in the road that forms an unofficial gateway to the street. At this corner the built form remains quite abstract as a solid concrete structure, giving way to more fenestration as one moves around the corner towards the entry.

Whilst the home is built in off-form concrete, the ground and first-floor pavilions are separated by a shadow line and in texture. The ground floor was formed with a smooth-off form finish contrasting from the more textured first-floor structure formed using horizontal rough sawn boards.

A sequence of existing angophora’s was retained along the western boundary to help maintain privacy with that neighbor. Here the landscape architect has ensured the new and old landscapes blend seamlessly and that the site’s natural surroundings are visually borrowed to extend the site parameters. A relatively private courtyard has been formed between the two concrete pavilions which aid in feeding both light and ventilation to the ground floor.

The acute forms created on the site create a playful geometry and the solid concrete walls become a blank canvas for the shadows of the new and existing foliage to cast upon. The off-form concrete skins of the home leave a trace of how they were constructed, not unlike a raw storyboard. The House Acute is both robust and compact and provides its owners with the means to escape their hectic city lives.